Toppenish, Wash. – Heritage University (HU) signed a formal Land Acknowledgement Statement (LAS) that recognizes and respects the Indigenous peoples as traditional stewards of the land in central Washington where Heritage is located, and the enduring relationship that exists between the Yakama Nation and their traditional territory. Kip Ramsey, a tribal elder and chair of HU’s Tribal Relations Committee, and Heritage president Andrew Sund, Ph.D. signed the LAS at a ceremony held at the Heritage University Teepee on Wednesday, November 10, 2021.

The Land Acknowledgement Statement in full, reads as follows:

Heritage University occupies its home on the traditional lands of the Yakama People. These ancestral homelands are the Yakama, Palouse, Pisquouse, Wenatshapam, Klikatat, Klinquit, Kow- was-say-ee, Li-ay-was, Skin-pah, Wish-ham, Shyiks, Ochechotes, Kah-milt-pa, and Se-ap-cat, who today are represented by the Confederated Tribes and Bands of the Yakama Nation [TREATY OF 1855] and, whose relationship with this land continues to this day. Heritage University, grounded in the vision of the two Yakama women founders, respects Indigenous peoples as traditional guardians of the lands and the enduring relationship that exists between Indigenous peoples and their traditional territories.  We offer gratitude for the land itself, for those who have stewarded it for generations, and for the opportunity to study, learn, work, and be in community on this land. We acknowledge that our University’s history, like many others, is fundamentally tied to the first colonial developments in the Yakima Valley. Finally, we respectfully acknowledge and honor past, present, and future Indigenous students who will journey through this home called Heritage University.

Maxine Janis, Ed.D., professor and the President’s Liaison for Native American Affairs at Heritage and a member of the Oglala Latoka nation said over the years Heritage has had various land acknowledgement statements used by various individuals but nothing officially authored by the University. “This signed document gives us an official, consistent message of land acknowledgment,” said Dr. Janis. “It’s a message that we truly recognize and respect the privilege it is to have a university on this land.” 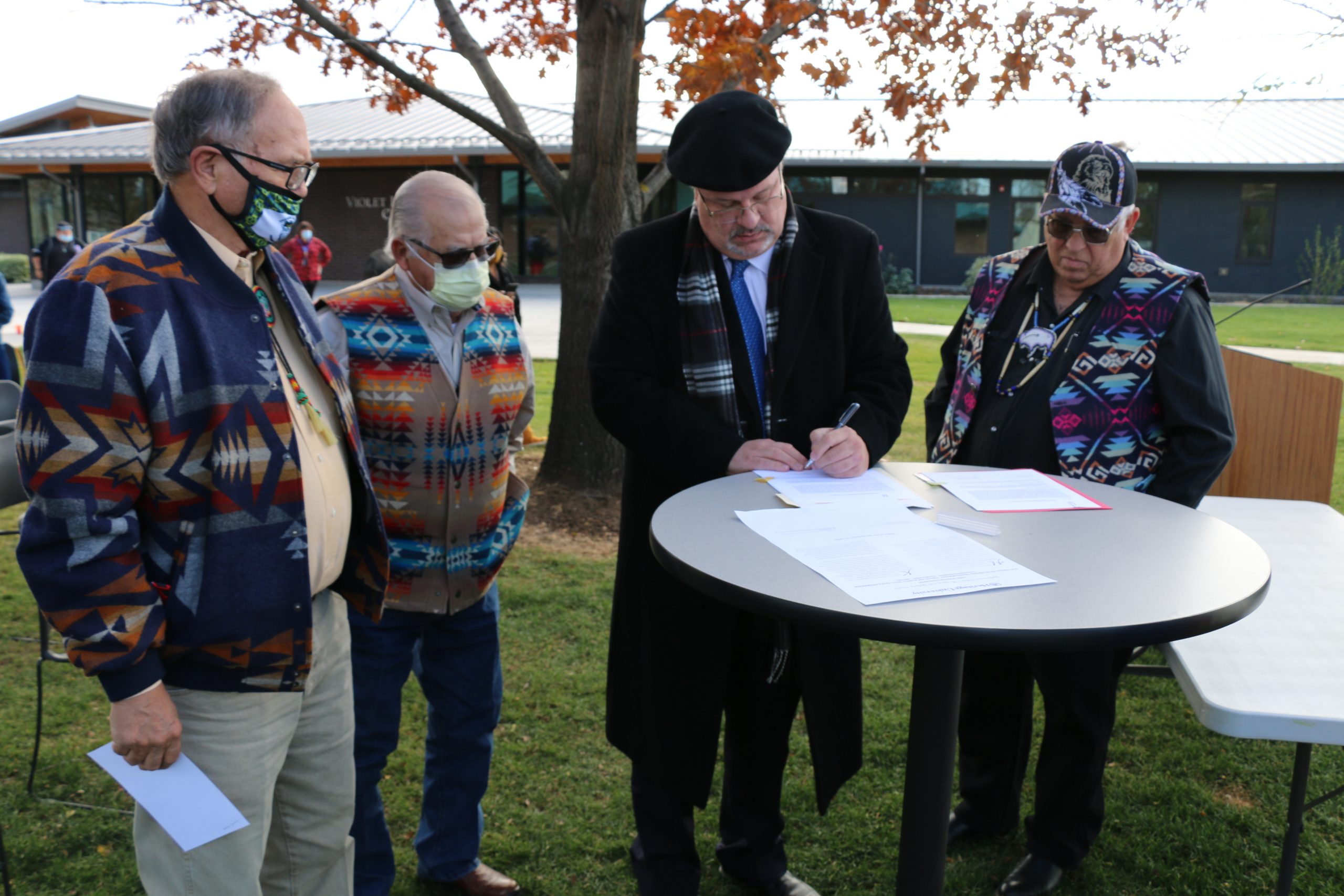 Sol Neely, Ph.D., associate professor of English at Heritage and a citizen of the Cherokee Nation who helped write the statement, said the LAS is an important step in further strengthening the long-standing relationship between the Yakama Nation and Heritage University. “Establishing a protocol for delivering the Land Acknowledgement Statement elevates public awareness of both Yakama Nation histories and futures across our campus and the broader community,” said Dr. Neely. “The LAS also includes recommended short and mid-term as well as long-range actions that, when implemented, will ensure meaningful change to benefit Indigenous students.”

Some of the short and mid-term actions include: posting a plaque or framed version of the full Land Acknowledgement Statement in prominent locations on campus; starting all campus events with one of the official Land Acknowledgement Statement(s); organizing “learning circles” on Yakama culture and traditions for all faculty, staff, and administrators and require new faculty, administrators and staff to attend; inventory Ichishkiin language preservation and revitalization resources at Heritage in order to build a “Dr. Virginia Beavert Collection” at the university’s Donald North Library that contains historical, cultural and linguistic materials for educational purposes, to name a few. Long-range actions include updating American Indian Studies (AIS) A.A. and B.A. programs so that Heritage becomes an “education destination” for students across the region; recruiting and retaining an additional Indigenous faculty member to contribute to the AIS programs; investing in and sustaining support for the Heritage University Language Center (HULC).

The Indigenous-led effort to develop the LAS began during the fall 2020 semester at HU when faculty members started talking about the growing number of LAS’s being established by other universities in Canada and the U.S. As support for the Heritage LAS grew, Dr. Janis created a committee of Indigenous faculty including Winona Wynn, Ph.D., Greg Sutterlict, Ph.D. candidate and the previously mentioned Dr. Neely, as well as Yakama Nation Higher Education Program Manager Elese Washines, Ph.D. to write the LAS. Neely, a citizen of the Cherokee Nation who has worked with other universities on their own LAS’s, incorporated a LAS between the Eastern Band of Cherokee Nations (EBCI) and the University of North Carolina Asheville (UNC-Ashville). During the spring, the draft LAS was endorsed by the HU Board’s Tribal Relations Committee and then presented to the Yakama Nation Tribal Council this past August, where it was warmly received and lauded and called a “landmark moment.”

Dr. Sund said the LAS signing is a very important day for recognizing Heritage’s history and mission with the Yakama Nation. “We know that education has been part of the Yakama Nation since time immemorial, as tribal elders share their knowledge with their children and younger tribal members. Heritage was created to bring higher education to this land and to serve as a complement to the education systems that already exist within the Nation,” said Sund.

Plans are underway to frame and display the Land Acknowledgement Statement on campus. For more information, contact Davidson Mance at 509-969-6084 or at mance_d@heritage.edu.

https://www.heritage.edu/wp-content/uploads/2021/11/IMG_0104-scaled.jpg 1707 2560 Davidson https://www.heritage.edu/wp-content/uploads/2018/03/Heritage-University-Logo.png Davidson2021-11-18 16:42:512021-11-19 08:54:38Heritage University Presents a Land Acknowledgement Statement to the Yakama Nation Recognizing and Respecting the Indigenous Peoples Who Stewarded the Land on which the University Now Resides