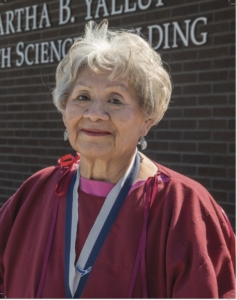 When Martha Yallup was a young woman, she needed to earn money for college. So every spring and fall, she went to the Upper Falls of the Klickitat River and fished for salmon.

“When they’d jump, she’d catch them in the air with a dip net, and then she’d haul them up the riverbank,” said Sydney Hill, one of Yallup’s nieces. “Each weighed 20 to 30 pounds.

“She’d sell them to non-Indian wholesalers at the Upper Falls, then take the Greyhound to Central Washington University in Ellensburg and go to class. Afterward, she’d go back to the river and, at night, she’d sleep in a pup tent with just her dog.”

This was the kind of drive that Yallup, who co-founded Heritage College, was known for. She died July 8th at age 80.

Throughout her life, Yallup earned three degrees, helped create the Yakama Nation Tribal School, established its Head Start program, and played a significant role in nurturing her many nieces and nephews, instilling the value of education in all of them.

“I think of her as a second parent,” said Hill. “She was always encouraging us to further our education. When I said I wanted to be a teacher, she asked me, ‘Why don’t you be an administrator?’ She wanted us to never limit ourselves.”

A ZEAL FOR EDUCATION

Yallup worked for the education of indigenous people with the same zeal she brought to her own life.

She believed that people from all walks of life, particularly students from low-income communities, had the right to a good education. She saw it as the way out of poverty.

Yallup earned her bachelor’s and master’s degrees in education and, later, her Ph.D. in education leadership, making her one of the first Yakama citizens with a doctorate. She wrote her dissertation on the indigenous experience of education, becoming a top expert in the field and a nationally renowned educator. She studied what had been, but she kept her focus on what could be.

During the George H.W. Bush administration, Yallup turned down a request to interview for a position that would have had national influence.

“Heritage University would not exist today without the determination of Martha Yallup,” Ross said.

Yallup’s work with Violet Lumley Rau on behalf of indigenous education, combined with Ross’s institutional knowledge and abilities, made it possible for the three to do what would have seemed impossible to others.

It was 1974 when Yallup and Lumley Rau went in search of a college that would bring college courses to the Yakima Valley so that their Head Start teachers could earn baccalaureate degrees. They came to see Ross, who was then the academic vice president at Fort Wright College in Spokane.

Ross convinced Fort Wright to start a remote campus in Toppenish, and the Yallup and Lumley Rau set about recruiting students.

When enrollment challenges at Fort Wright made it necessary to close the college, Ross broke the news to Yallup and Lumley Rau.

“Martha said simply, ‘Let’s just start our own college,’” said Ross. “I told her that was crazy, and she said, ‘Tell us one thing we can’t do.’”

Ross told them the biggest challenge she knew: They’d need to pull together a board of directors. Not about to let their dream die, Yallup and Lumley Rau went to work, gathering the heads of a local bank, a hospital, and a school district, and two of the three county commissioners to serve as the core of the new college’s board.

Through their determination and planning, the dream they set out to accomplish was about to become a reality. Soon, Heritage College was born.

Following Heritage’s founding, Yallup continued to serve the university in several important roles. Her involvement was integral to the relationship between the college and the Yakama Nation.

She served as director of educational programs for the tribe, as well as tribal administrator, a role that allowed her to effectively communicate and implement educational priorities and objectives due to her direct communication with the Tribal Council. 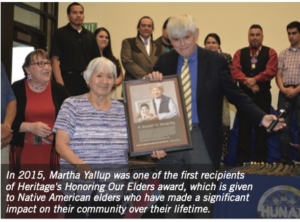 Yallup remained on the Heritage board for more than 20 years, bringing Yakama Nation input to board and committee meetings. Upon retiring from the board, she was granted Board Member Emeritus Status, which allowed her to continue to be a guiding voice.

“When we had important visitors, especially those from foundations or agencies regarding major grants or gifts, I often asked Martha to come meet them,” said Ross, who was president of the college and then the university. “She was always very articulate in expressing the importance of Heritage College to the Yakama Nation.”

Having gained a great deal from her own pursuit of higher education, Yallup often expressed her particular belief in the importance of hiring the most qualified Heritage faculty at Heritage, Ross said.

“Martha stressed the importance of hiring fully qualified faculty, as many with doctorates from reputable institutions as possible. She was always happy and supportive when we were trying to do that.”

THE LEGACY LIVING ON

The significance of Martha Yallup’s contributions to Heritage University lives on in the form of the Martha B. Yallup Health Sciences building and the Bill and Martha Yallup Scholarship Fund.

“It was appropriate to put Martha’s name on a building that was dedicated to academic programs since she had pursued advanced higher education and so greatly valued it,” said Ross. Today the building is used for several different programs and houses the Heritage advancement department offices.

Martha Yallup may well have found the Yallup Scholarship Fund the most meaningful tribute to her life, her work, and her ideals for the betterment of her people. Established in 2007, it awards scholarships to Yakama tribal members or Yakama descendants majoring in natural sciences or health-related majors.

If Martha Yallup ever felt doubt or frustration pursuing her goals, it wasn’t obvious to the people who knew her.

“She didn’t always agree with tribal leadership, but she knew she needed to get past any differences in order to get what the people needed,” said Hill.

“She may have experienced some frustration if something didn’t seem possible because of lack of resources or when people weren’t seeing her dream or vision,” said Ross. “But she had so much of the energy and connections to get things going and see them through. That’s why she was so effective and accomplished.

“For Martha, it was always about how we should continue working toward our vision and what we should do for others.”