Leaders for the Good of the Nation 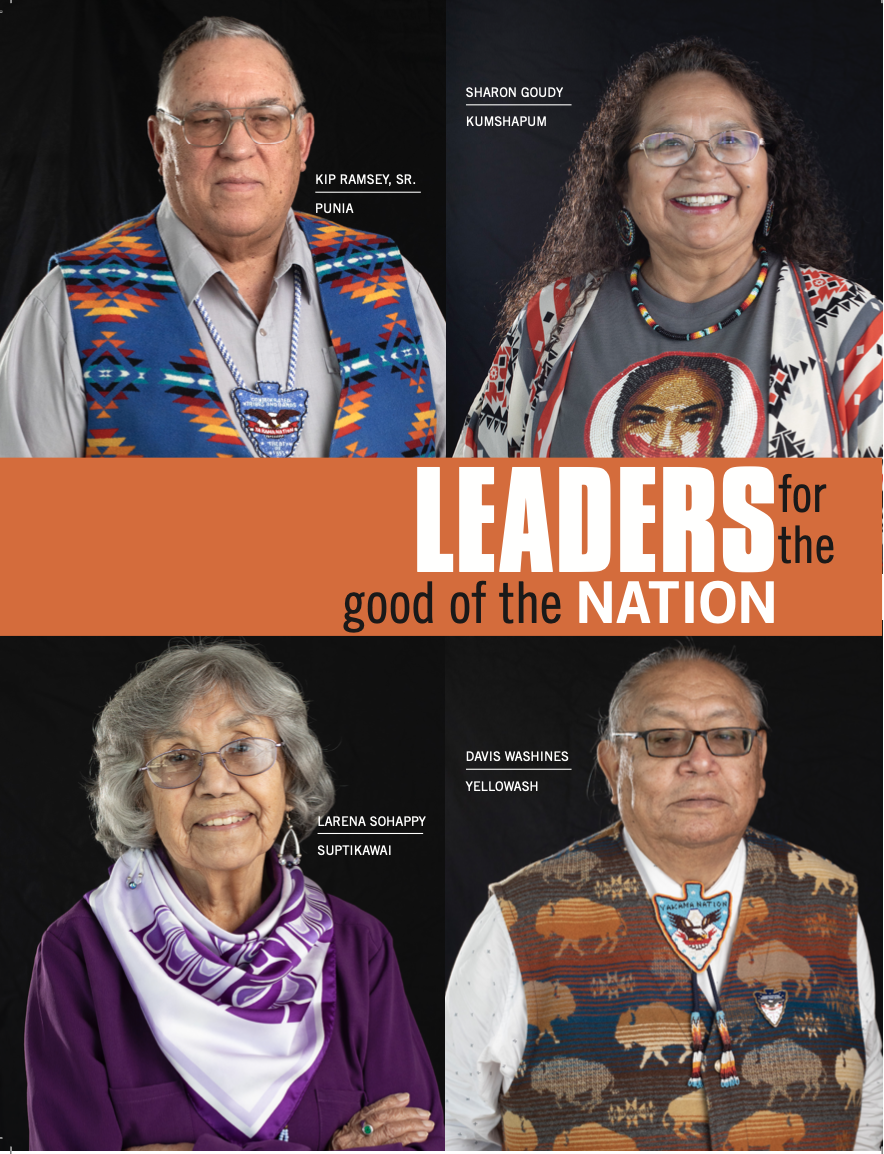 Every year, Heritage University kicks off its celebration of Native American Heritage Month with a flag-raising and honoring ceremony recognizing four Native American elders.  This year global circumstances forced us to celebrate differently. While we were unable to come together for the gatherings, we celebrated nonetheless with virtual lectures and the selection and public promotion of the four elders whose lifetime contributions to their community made and continue to make a significant impact in the lives of others. This year, we recognize:

“PUNIA” KIP RICHARD RAMSEY, SR. is an entrepreneur, a staunch advocate for treaty rights,
and a historian. Over his lifetime, he has built a cattle ranch and feedlot, a logging company, two gas stations and restaurants, and a tribal fuel distributorship. His businesses add to the economic vitality of the communities in which they sit and employ many Yakama tribal members and others in the community. When the State of Washington infringed upon his rights to move his products freely on state roads to bring them to market, he refused to back down. Twice, he took his battle to protect treaty rights all the way to the Supreme Court. Twice he won, reaffirming the Yakama Nation’s status as a sovereign nation. Above all, Kip is dedicated to serving the people of his community. He sits on numerous boards of directors, including the Heritage University board, for the last 35 years. Punia is an advocate for education and a protector of cultural treasures.

SHARON GOUDY “KUMSHAPUM” is a dedicated mother, grandmother, great-grandmother and wife of more than 50 years to Pat Goudy, who is rooted in her Christian faith and traditional religions and commitment to ensuring the sovereignty of the Yakama Nation. Her work building the vitality of Yakama Nation programs and enterprises spans more than 50 years and began while she was earning her college degree. She’s led programs that support tribal members’ economic independence, oversaw the administration of the tribe’s law and justice programs, and currently manages YN Credit Enterprise. She has a heart for youth and elder services. Through her term on Tribal Council, she helped lay the groundwork for the revenue-generating businesses runt hrough Yakama Nation Enterprises. She serves on the Elders Board and college intertribal relations board. Her work ensuring sovereignty and the welfare of indigenous people isn’t limited to the Yakama Nation. She’s spent 21 years serving on the Affiliated Tribes of the Northwest Indians, a consortium of 57 tribes, helping to build policies and initiatives that address tribal sovereignty.

SUPTIKAWAI LARENA SOHAPPY, the daughter of Julia and Frank Sohappy, a well-known medicine man, grew up in the Wapato and Priest Rapids Longhouses. She was the first in her family to graduate from high school and college, having attended Haskell Institute. Suptikawai dedicated herself to helping the people of the Yakama Nation. She served as an interpreter for elders seeking financial and housing services with Yakama Nation Housing Authority. While at Yakama Nation Credit, she helped establish the tribal payroll deduction program, which later became the rotating credit program. As coordinator of the Yakama Victims of Crime Assistance Program, she helped crime victims access services to help them heal. Additionally, she served as a Tribal Council member and is currently Vice Chairwoman of the General Council. Suptikawai is one of the elders of the Wapto Kaatnum and an elder at the Priest Rapids Longhouse. Above all, she is dedicated to her large, extended family.

DAVIS “YELLOWASH” WASHINES has dedicated his life to protecting the welfare of the Yakama Nation, the Yakama people and the rights guaranteed to them by the US-Yakama Treaty of 1855. He dedicated more than 35 years to ensure the safety of his community as a Yakama tribal police officer, the chief of police, and the chief of the Columbia River Inter-Tribal Fish Commission. He worked on many efforts to improve the safety of tribal members, including the establishment of mandatory seatbelt laws on the Yakama Nation, and bringing national attention to the issue of missing and murdered Indigenous women. He is a dedicated advocate for protecting Yakama treaty rights and was instrumental in restoring the original spelling of the Yakama name as it is recorded in the US-Yakama Treaty of 1855.