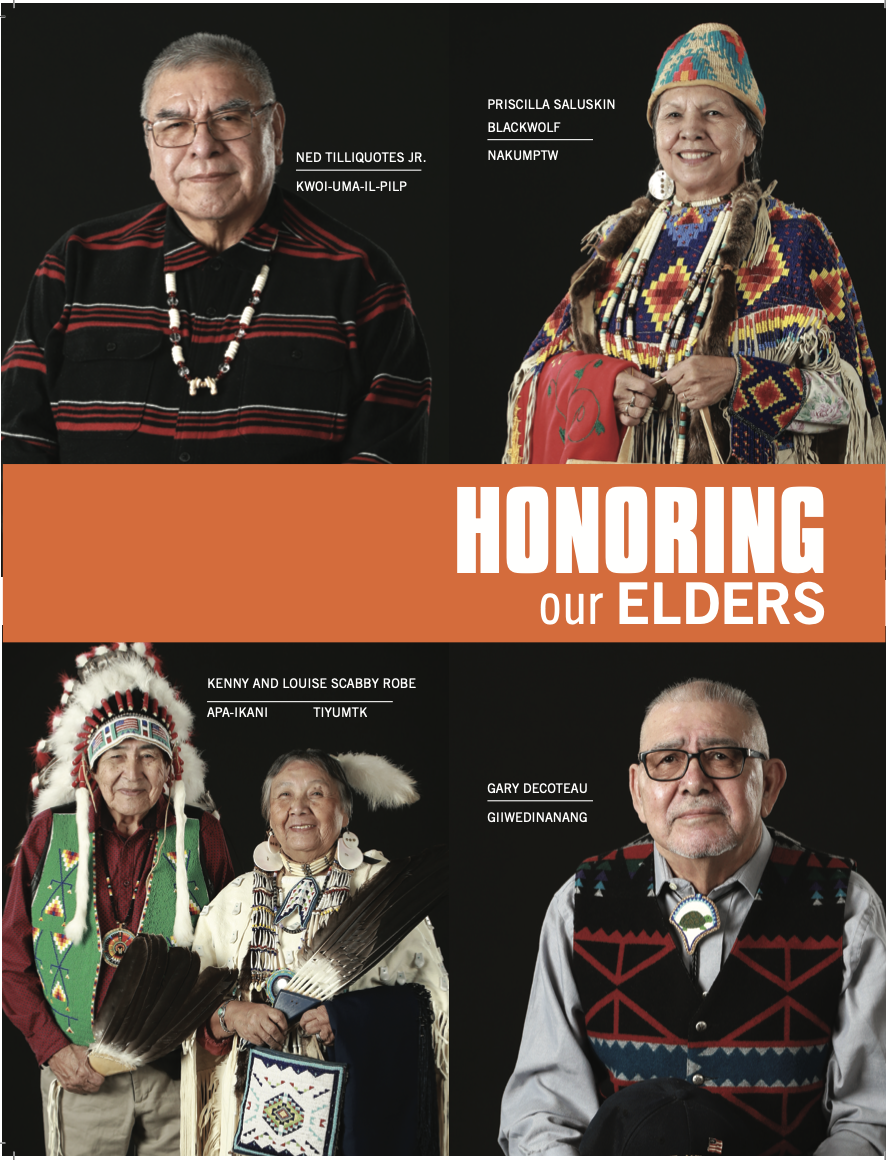 Every year, for the past six years, Heritage University has recognized Native American elders for their lifetimes of significant contributions to their communities as part of its Native American Heritage Month celebration. This year, our honorees include a cultural preservationist and mentor, Grammy-nominated musicians, an award-winning educator and an elected official.

NED TILLEQUOTES JR. “KWOI-UMA-IL-PILP” spent a lifetime ensuring the safety and viability of the Yakama Nation and its people. As a tribal police officer, he helped individuals and families during times of their greatest vulnerability by enforcing laws to protect the welfare of others. Then, as an elected official serving on the Tribal Code of Ethics Board, he ensured that those in power fulfilled their duties with integrity. Today, as a member of the Yakama Nation General Council, he serves his people by assuring the prosperity and integrity of the tribe and its treaty rights.

NAKUMPTW PRISCILLA SALUSKIN BLACKWOLF is enrolled Yakama and Wishxum Colville. Growing up, her parents and grandparents taught her the importance of family, love and forgiveness. However, cultural and spiritual connections through traditional crafts, food gathering and ancestral language were something she had to seek out on her own as an adult. She found her way to the longhouse and made a connection that was so powerful that Priscilla dedicated much of her adult life to helping other indigenous people find their own connections to their culture. To this day, she serves as a voluntary mentor, teaching Ichishkiin and taking young people food gathering using traditional ways steeped in ceremony. Because of her, many men and women who were disconnected from their traditional ways are re-engaged with their culture and are passing it along to their children and grandchildren.

KENNY “APA-IKANI” AND LOUISE “TIYUMTK” SCABBY ROBE live their lives dedicated to faith, family and culture. Both grew up, raised
in their cultural traditions. Kenny, a member of the Blackfeet Nation and Louise, who is enrolled Yakama, were both hoop dancers who competed against one another at powwows throughout the west. Many years later, when they met as adults and fell in love, the couple made the conscious decision that they would raise their 12 children with reverence for God and a connection to their cultural heritage through music and dance. That commitment led to the formation of the multi Grammy-nominated drum group Black Lodge Singers whose members include Kenny, Louise and their 12 sons. Since its formation, Black Lodge has served as a cultural ambassador and a source of pride and inspiration for Native Americans everywhere. They have traveled the world, connecting people from different lands, cultures and points of view through the universal spiritual language of music.

GARY “GIIWEDINANANG” DECOTEAU is enrolled Turtle Mountain Chippewa, who settled in the Yakima Valley and dedicated his life to helping youth achieve their greatest potential through education. He spent 38 years as an educator, first as a teacher at the Yakama Tribal School and then at the Toppenish Middle School, before earning his principal credentials from Heritage University. He went on to serve ten years as the middle school’s principal, earning the prestigious recognition as the Regional State Principal of the Year in 2008. After his retirement, he turned his attention to helping adults achieve their academic dreams when he joined the faculty at Heritage University, where he taught classes and mentored Native American college students.