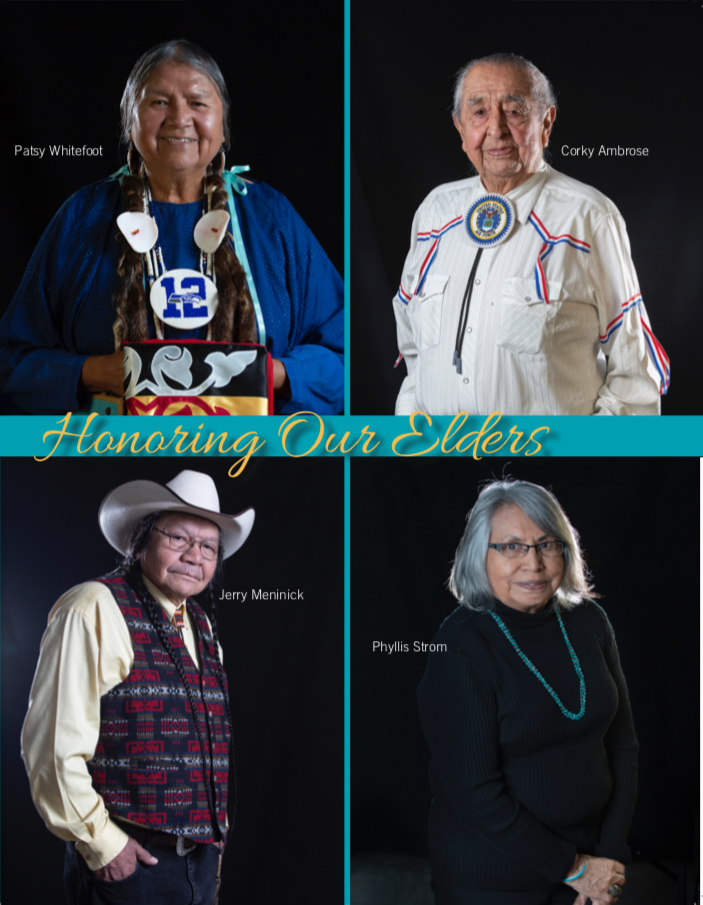 November is Native American Heritage Month, and each year, Heritage University kicks off its celebration by honoring four Yakama elders for their lifetime contributions to their communities. This year we recognize Corky Ambros, Jerry Meninick, Phyllis Strom and Patsy Whitefoot.

CORKY AMBROSE is a warrior and a protector. While serving in the US Air Force, he was part of a flight crew that brought troops, supplies and humanitarian aid to foreign countries. When he returned to civilian life, he spent the next 40 years protecting the natural resources of the Yakama Nation, both as a forester then as a woodland firefighter. Today he is his brother’s and sister’s keeper: supporting fellow veterans, providing funeral service support for the fallen, and serving the community through the Yakama Warriors Association, an organization he helped found in 1992.

JERRY MENINICK’S is passionate about helping the people of the Yakama Nation thrive through the preservation and practice of their cultural history. “We need to learn from our past, to create our future,” he says. His deep and abiding commitment began quietly, growing up in a traditional home where the family fished on the Columbia and listened to their elderstell stories passed down for generations. It grew intoa profession when he started collecting elders’ stories about the Columbia River for a preservation project with the US Forest Service, and into a passion when he was elected to Tribal Council and later became Chairman. As he sees it, connecting to one’s cultural heritage, understanding and appreciating the sacrifices your ancestors made, and practicing time-honored traditions, grounds a person, makes them strong, and in turn, adds to the strength of the entire community.

PHYLLIS STROM spent most of her working years looking out for the welfare of her people of the Yakama Nation. A bookkeeper by training, she spent 35 years safeguarding the strength and sustainability of many tribal programs. Additionally, she sought new funding sources to provide additional services to the Department of Natural Resources, Human Services and Law Enforcement, while continuing to ensure services to manpower and career enhancement programs to assist Native Americans in becoming self- sufficient and build careers to sustain their livelihood. She enjoyed working for the Bureau of Indian Affairs, Indian Health Services and Yakama Nation where she helped enforce compliance to established regulations to protect eligibility for continued funding. She credits staff for giving the membership quality services and allowing her to enjoy motherhood for her eight children.

PATSY WHITEFOOT is not afraid of confronting injustices. In fact, she’s spent a lifetime fighting for the rights of Native peoples everywhere. She’s been a strong voice for change at the state and national levels calling for improved access to educational opportunities from preschool through college for Native American students. President Obama appointed her to serve on his National Advisory Council on Indian Education. She’s brought attention to the need for improved mental health and addiction services for Native Americansand is a leader in the movement to draw attention to the plight of missing and murdered indigenous women both on the Yakama homelands and across the nation.

The four elders were each featured in ads that ran in the Yakama Nation Review and were honored during a special ceremony at the university on November 8. This is the fifth year that Heritage has honored Yakama elders. Portraits of all of the recipients are on a permanent display in the Violet Lumley Rau Center.