From Teen Mom to College Grad

FROM TEEN MOM TO COLLEGE GRAD

Sometimes the greatest blessings come from moments of uncertainty. It is a truth that recent Heritage graduate Nansi Iniguez knows well. After all, her path from high school student to college graduate wasn’t an easy straight line. It was more like a magical labyrinth where dead ends morphed into doorways as opportunities melted away obstacles that blocked her path.

Iniguez is the second of four siblings. The only sister in a close-knit family. Her parents are farmworkers who immigrated to the United States from Mexico to California before moving to the Yakima Valley. Growing up, Iniguez and her older brother sometimes work alongside her parents in the fields. Her parents would tell them about how they came to America so their children could have a better life and how education was the key to accessing a world of opportunities.

“My brother and I are pretty close in age, and we were very competitive,” said Iniguez. “We both excelled in school. When we thought about our future, there was no question that we would go to college after graduating.”

While college was expected, exactly how the two would get there wasn’t quite as certain. The family’s modest means didn’t leave a lot of money available to pay for tuition and books. A Washington state program that gives high-achieving students the chance to earn college credits for free while completing their high school education was one solution. Iniguez enrolled in the University of Washington’s University in the High School program and completed several credit-bearing math and English courses before graduating.

The second solution was scholarships.

“I still have flashbacks to the conversations we had with my parents encouraging us to get good grades in school so we could get scholarships. They always talked about how tiring their jobs were but that they couldn’t stop because they had to send not one of us to college but both. They wanted to provide us both with the opportunity to thrive and be educated, but they knew it was an expensive route. One thing that they taught us was a strong work ethic and perseverance, so I applied that to the search for scholarships. I spent months planning and preparing scholarship applications.”

Iniguez was doing all she could to set herself up for a successful transition from high school student to college co-ed when she got the news that jeopardized all her plans. The 18-year-old high school senior was going to be a mommy. She hit the first wall in the labyrinth.

“I thought, ‘ok, this is it. No college for me,'” she said. “There is so much pressure on teen moms, so much doubt. I felt like I had failed everyone, my parents, siblings, and community.

“The funny thing is it was around the same time I was breaking the news about my pregnancy to my parents that I got the call that I was being awarded the Sinegal Scholarship.”

Just like that, the roadblock in the labyrinth disappeared, and a new pathway opened. 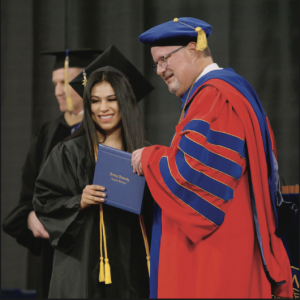 One of the scholarships that Iniguez had applied for several months prior was the Sinegal Family Foundation Scholarship. This full-tuition award pays for up to four years of study pursuant to a bachelor’s degree at Heritage.

Costco co-founder Jim Sinegal and his wife Jan established the scholarship in 2018. Iniguez was one of five students selected as part of the second cohort of scholars. Since its foundation, 19 students have attended Heritage on this scholarship. The fifth cohort of Sinegal Scholars is slated to begin their course of study in the fall.

“It was such an overwhelming experience,” said Iniguez. “They saw something in me that I couldn’t see in myself at that moment. They were part of the community of people who helped me get back on track to pursue my dream.”

Iniguez enrolled at Heritage and declared psychology as her major. Her daughter Clarissa was born a little more than a month before starting her freshman year. It took a bit of juggling and a lot of support from her family, but when classes began that fall, Iniguez was there. She enrolled full- time taking five classes that semester, and earned an A in every one of them. In January, when spring semester started, Iniguez was back in the classroom.

Then in March, the labyrinth shifted again when COVID brought in-person learning to a screeching halt, and everything moved online. The change was more of a blessing than a curse for Iniguez. She was in the middle of the tug- a-war that plays on every working mother’s heart—dividing her attention between caring for her baby and taking care of business, or in her case, going to school.

“Most of the time, sacrificed time with my daughter to focus on exams, studying and homework. I would put her to bed and stay up until 2:00 in the morning to work. Or, I would wake up at 5:00 a.m. to get ahead on work,” said Iniguez. “The advantage of being online was that most of the time, the course work was already posted. We just had to learn, apply and work through it on our own schedule. I would wake up earlier than Clarissa and do hours of work. Then, I could make time for her during the day.”

Iniguez thrived in this online environment. She earned a perfect 4.0-grade-point average every semester. When she graduated in May, she was one of 19 students to receive the Board of Director’s Excellence Award, which is presented to undergraduates who earned a 4.0 every semester throughout their study at Heritage.

During the summers, when she wasn’t in school, Iniguez worked in the fields to earn and save money to help her and her husband make it through the rest of the year. The work is hard—it’s physically grueling laboring for long hours in the Central Washington heat. Before the summer between her junior and senior years, she decided she needed to find another option. She sent a message to her professor, Amy Nusbaum, to see if she knew of anyone who was hiring. Nusbaum sent her several leads; among them was a position working as a bilingual screener with the Northwest Justice Project. It couldn’t have been more perfect. Iniguez’s career goal at that time was to become an attorney. The job would give her some experience in the legal field.

Moreover, the position required the employee to work remotely from home. Iniguez could work and be home with her child, plus she could work her class schedule around her job schedule. She applied for the position, was hired and started the job in June 2021.

The blessing of the job led to yet another shift in her pathway. Hearing the stories from the people who called the eviction hotline she worked, plus the insight that comes from being a mother, got her thinking about how she can make a bigger impact on her community.

“I want to be more hands-on with people and have a more direct impact. Perhaps working with children in the schools as a psychologist,” said Iniguez.

For now, she said, that decision can wait. The number of calls on the eviction hotline she monitors is so high that her temporary position is now permanent. She plans to stay with the Northwest Justice Project for a few more years until her daughter starts school. Then she wants to return to school to earn a master’s degree.

If there is one thing that Iniguez’s journey through college taught her, it’s that no matter what surprises life has in store, the path she is on will inevitably shift. The opportunities that come from the twists and turns will be magical and take her exactly where she is meant to be.